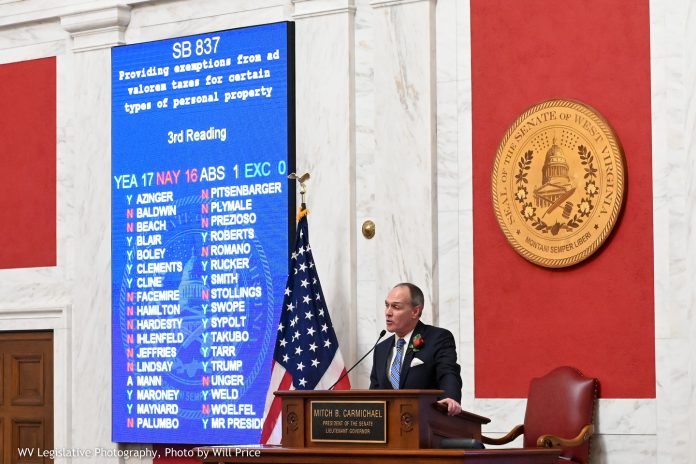 The Senate met at 11:00 a.m. on Monday and discussed SB 837. This bill creates a 6-year phase out of personal property taxes on manufacturing machinery, equipment, automobiles and inventory. The bill creates a Special Revenue Account which provides that the Legislature restore funding to counties and municipalities in compensation for the tax cut.

The bill would become effective if Senate Joint Resolution 9, a constitutional amendment granting the legislature the right to eliminate or lower Ad Valorem Tax on personal property, is voted for by West Virginian citizens.

The Senate was very divided when discussing the bill, some believing that this would improve West Virginia’s competitive economic environment while others feared that West Virginians would suffer from the sales tax while large corporations benefitted.

Senator Mike Romano, D-Harrison, expressed the concern that the large corporations benefiting from the tax break will take that money back to the headquarters of the business, rather than feed the money from the tax cut back into West Virginia’s economy.

Senator Chandler Swope, R-Mercer, rose in support of the bill, saying that cutting the taxes is a good investment to help foster business in the State. One of his arguments in favor of the bill is that eliminating the tax can help to raise wages in the state.

Senator Eric Tarr, R-Putnam, stated his approval of the bill. “Growth is undeniable with this plan,” he said.

Senator Charles S. Trump IV, R-Morgan, rose in strong support of the bill, referring to SB 837 as an “extraordinary piece of legislation”. Trump stated that the tax break would provide for more West Virginian businesses to thrive and afford to hire West Virginian citizens. “This tax is a job-killer,” he said, “and we have suffered under the illusion that there’s nothing we can do about it.”

Senator Craig Blair, R-Berkeley, closed the debate by urging a Yes-vote. In response to those who opposed the bill, he stated that the bill would only be implemented with the consent of the majority of West Virginian citizens. He said that this tax cut would improve the business environment, create jobs, encourage competition, and foster investments in the state.

When the Senate voted on the bill, it passed 17-16 and advanced to the House.

The Senate also passed 20 other Senate bills on Monday.

SB 528 creates the Uniform Worker Classification Act. The purpose of the bill is to create a test to distinguish independent contractors from employees. This bill was also debated by the Senate. Senator Trump presented the bill, stating that this would help to decrease confusion for businesses.

This was also debated in the Senate, as the bill would lower the bar for what classifies an independent contractor, which do not receive unemployment compensation.

Senator Mike Romano, D-Harrison, stated that this bill doesn’t put West Virginians first and was meant to benefit lawyers and large corporations. Others stated that the bill may increase litigation rather than decrease it.

The bill passed 17-16 and advanced to the House.

SB 578 was also passed, which recalculates the tax on producing, selling and generating solar electricity. The bill aligns the price with other energy taxes. Many members of the Senate regarded this as a step forward in the state’s investment in renewable energy sources and believe that the bill would help the state to be less reliant on the coal industry.

The Senate also passed SB 689, which creates the Requiring Accountable Pharmaceutical Transparency, Oversight, and Reporting Act. This bill requires drug manufacturers and health benefit plan issuers in the state to provide cost information, changes in cost information and prescription drug statistics to the State Auditor. The State Auditor is required to publish this information on a searchable transparency website for public use.

The Senate also adopted Senate Concurrent Resolution 46, which requests the DEP and DHHR to propose a source-water supply study plan.

The Senate has adjourned until tomorrow at 11 a.m.