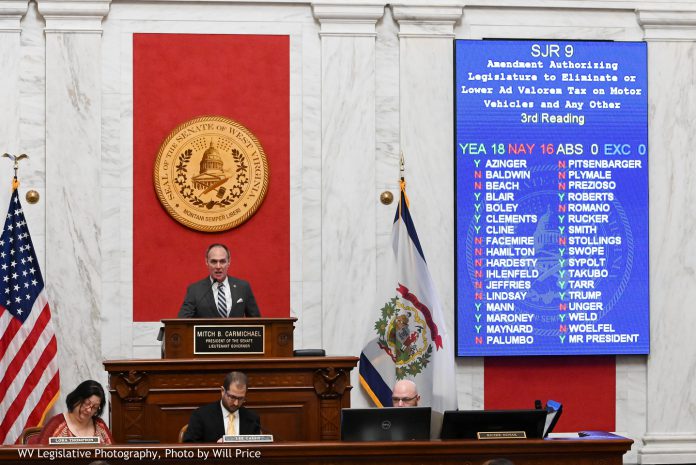 The bill removes the constitutional requirement for the uniformity of taxation and allows the legislature to set different rates of taxation, valuation and/or assessment in the state. The resolution required the votes of at least 2/3 of the Senate to advance to the House.

This resolution has been highly anticipated in the Senate since January 8, when Governor Jim Justice listed the elimination of the business inventory tax as a priority in his State of the State address. The Resolution allows for the implementation of SB 837, which creates a six-year phase out of personal property taxes on manufacturing inventory and machinery.

The Senate was very divided and engaged in lively debate concerning this issue. Many expressed support for the resolution, stating that it would allow the citizens of West Virginia to vote whether they desired this change, and would allow them to voice whether they support the tax cut to businesses. Others opposed, stating that the resolution and the bill were not without consequences and citizens would have to pay for the tax cut to businesses.

Senator Ryan Weld, R-Brooke, agreed, stating that this is a decision for the people of the state about how to spend their money.

Senator Mike Romano, D-Harrison, spoke against the bill. “The resolution, first and foremost, usurps local control of counties and places it in the hands of the Legislature,” he said. He stated that he is concerned about the decisions made if the resolution should pass. He also said that it was unlikely the people of West Virginia to make an informed decision when voting on the resolution because it is deceptive. “We are showing citizens a tax cut, when behind our back is a tax increase,” he said.

Senator Paul Hardesty, D-Logan, agreed that, even though the resolution may have the best intentions, county autonomy would be severely impaired.

Senator Craig Blair, R-Berkeley, rose in response to claims that the resolution is deceptive. He stated that he supported the resolution and would ensure that the language is transparent and readily available to the public before Election Day.

Senator Patricia Puertas Rucker, R-Jefferson, stated to those concerned that the bill does not guarantee a tax break or increase, but gives the decision to the people. She said that she had seen a lot of concerns about the resolution infringing on funding to public education and wanted to assure that the resolution does not interfere with the constitutional mandate to continue funding education.

Senator Trump closed the debate by saying that this resolution was intended to move WV forward and create measures to improve business investment in the state.

The Resolution was rejected with 18 in favor and 16 opposed.

The Senate passed a total of 29 Senate bills on Tuesday.

SB 284 creates the West Virginia Health Care Continuity Act, which ensures that healthcare coverage plans meet certain standards while remaining affordable and are not denied to persons with preexisting conditions.

SB 668 enacts the Uniform Trust Decanting Act, which allows a trustee to distribute assets of one trust into another trust.

Ten bills on second reading were passed after the Senate suspended Constitutional rule that a bill be read on three separate days to receive a vote.

SB 106 makes daylight savings time the official time year-round in the state. If the bill becomes law, it will only be made effective after federal congressional action to allow it.

SB 472 provides an alternative sentencing program for work release for individuals convicted of a misdemeanor or felony. The bill allows such persons to work with the Division of Highways or the Division of Natural Resources on tasks such as cleaning up state parks or highways.

SB 569 expires funds from various accounts and moves them to The Medical Services Program Fund of the Department of Health and Human Resources.

SB 570 expires funds from the State Excess Lottery Revenue Fund and moves them to the Medical Services Program Fund of the DHHR.

SB 633 creates the Medicaid Families First Reserve Fund Account. This fund would be administered by the Secretary of the DHHR.

SB 729 relates to awards and disability distributed under the Deputy Sheriff Retirement Act.

SB 749 requires the Fatality and Mortality Review Team to share data with the Center of Disease Control in order to identify themes and risk factors as well as other determinants of health.

SB 798 requires dairy foods processed in the state ne added to the list of items to be purchased by state-funded organizations.

SB 805 is a supplemental appropriation of funds from the state Treasury to the West Virginia Commuter Rail Access fund.

SB 812 is a supplemental appropriation to transfer funds from Lottery Net Profits to the Bureau of Labor Services.

The Senate amended House amendments for SB 39, which is a rules bundle for the Department of Health and Human Resources. The Senate concurred and completed legislation for the bill.

The Senate also concurred with House amendments for SB 657, which allows for the designation of tourism development districts in the State.

The Senate adopted Resolution 50, designating February 25, 2020 as Fairmont State day. A brief recess was held for the presentation of the resolution and a visit from Fairmont State students.

Resolution 51 was also adopted, celebrating the 90th anniversary of the Shinnston Fire Department. A brief recess was held for the presentation of this resolution and to thank the staff of the Fire Department.

The Senate is adjourned until tomorrow at 10 a.m.