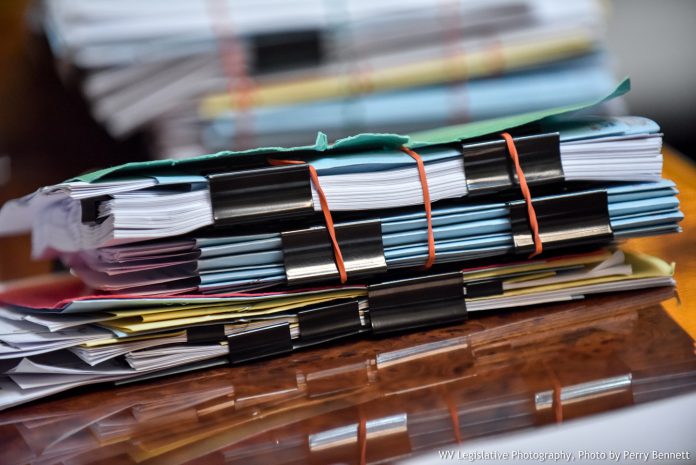 House Bill 2077 removes the requirement that the Joint Committee on Government and Finance be given reports on the Colin Anderson closure and relocation of its patients. The Colin Anderson Center, a state mental health hospital and facility, was closed December 31, 1996, and its patients were either transferred or deinstitutionalized. Current State Code directs the Secretary of the Department of Health and Human Resources to submit monthly reports to the Legislature’s Joint Committee on Government and Finance pertaining to the placement and monitoring of all residents transferred from the Colin Anderson Center.

House Bill 2803 would allow the Board of Barbers and Cosmetologists to continue until July, 1 2008. The Board regulates the barbering and cosmetology professions.

House Bill 2094 regulates the release of ﬁsh, water animals and other aquatic organisms into the waters of West Virginia. This measures makes it unlawful to release any ﬁsh, water animal or other aquatic organism into the public waters of this state without first obtaining a permit from the Division of Natural Resources. However, the bill allows the release of trout originating in West Virginia or imported as long as the imported trout meet the disease free certiﬁcation requirements set forth by state code. Additionally, bass which meet the disease free certiﬁcation requirements may also be released without a stocking permit.

House Bill 2359 allows all of the fees collected for required inspections done by the Ofﬁce of the State Fire Marshal and for license fees for electricians and electrical inspectors to be kept in a special revenue account, instead of having 10% of the fees transferred to the General Revenue Fund. It also would require that the tax on insurance companies which provide ﬁre insurance be deposited in that account.

House Bill 2500 clariﬁes that courts may continue orders of protection in relation to domestic violence while certain court proceedings are pending. The bill allows this continuation of an order of protection during the pendency of divorce, separate maintenance or annulment.

House Bill 2556 requires the Insurance Commissioner to issue an annual communication to state and local governmental entities and nonprofit organizations to increase awareness of certain ﬂood insurance issues. The bill ensures state and local governmental entities and nonproﬁt organizations are aware of the 1988 amendments to the federal Robert T. Stafford Emergency Assistance and Disaster Relief Act. This Act imposes penalties in the form of reductions in Federal Emergency Management Agency (FEMA) disaster relief funds on public entities who fail to purchase adequate ﬂood insurance on all property located in identiﬁed ﬂood hazard areas. It also considers the magnitude of risk exposure and potential ﬁnancial loss that may result from these penalties and makes these entities aware that low-cost, federally subsidized ﬂood insurance may be available through the National Flood Insurance Program (NFIP).

House Bill 2696 removes certain limitations on the Commissioner of Agriculture to increase fees of certain services. Current law states that fees can only increase to double the amount established in 1984. This measure removes this requirement and allows the Commissioner to establish and propose legislative rules pertaining to the increase of fees.

House Bill 2870 speciﬁes the jurisdiction of the Public Service Commission (PSC) over certain described electric generating facilities. The measure requires persons, corporations and other entities that intend to construct and operate electric generating facilities, or that intend to make or construct material modiﬁcations to obtain a siting certificate from the PSC, in lieu of a certificate of public convenience and necessity. The bill also allows the PSC, under specified circumstances, to seek the imposition of civil or criminal penalties.

House Bill 2965 allows any state agency which utilizes the services of a dog or horse to transfer ownership of the animal to any person, handler or state agency who wishes to adopt it, including placement in a humane society. The bill also notes that the transfer of the animal shall be accompanied by documentation that holds the state harmless from liability.

Senate Bill 205 modiﬁes the criminal intent requirement for animal cruelty crimes and increases the ﬁnes. Additionally it creates a felony offense for intentionally torturing or maliciously killing animals and it mandates persons convicted of animal cruelty be prohibited from possessing, owning or residing with animals for varying periods depending on whether the person is convicted of a misdemeanor or felony.

Senate Bill 390 removes the requirement that a person’s Social Security Number appear on a commercial driver’s license (CDL). However, the license will still have to include the driver’s name, eye and hair color, weight, gender, date of birth, address, signature and color photo.

Senate Bill 414 authorizes the Real Estate Commission to enter into license reciprocity agreements with other states. The bill permits the Commission to make additional education requirements for out-of-state licensees who work within West Virginia. A reciprocity agreement will allow West Virginia to recognize the licenses of another jurisdiction with similar licensing requirements and could stipulate that the other jurisdiction recognize the licenses of this state.

Senate Bill 461 will update the section of the West Virginia Corporation Net Income Tax Act which brings terms in that Act into conformity with Federal terms for Federal Income Tax purposes.

Senate Bill 462 will update the West Virginia Personal Income Tax Act by bringing the terms into conformity with their meanings for Federal Income Tax purposes.

Senate Bill 166 continues the Oil and Gas Inspectors’ Examining Board until July 1, 2009. The Oil and Gas Inspectors’ Examining Board’s responsibilities include promulgating rules relating to the examination, qualiﬁcation and certiﬁcation of candidates; conducting examinations of candidates; preparing and certifying a register of qualiﬁed eligible candidates for appointment as oil and gas inspectors; and, hearing and determining discipline proceedings of inspectors and supervising inspectors.

Senate Bill 282 continues the Division of Motor Vehicles (DMV) until July 1, 2004. The DMV is a division of the West Virginia Department of Transportation and provides driver information and education through its 19 regional ofﬁces.

Senate Bill 283 continues the Public Service Commission (PSC) until July 1, 2008. The PSC supervises and regulates the rates, services, operations and most other activities of all public utilities and many common and contract motor carriers of passengers and property within West Virginia, as well as processes and acts on petitions ﬁled by these regulated entities. The Commission also acts upon complaints against utilities and common carriers.

Senate Bill 284 continues the Division of Purchasing within the Department of Administration until July 1, 2004. The Division of Purchasing was created for the purpose of establishing centralized ofﬁces to provide purchasing, travel, and leasing services to the various state agencies. Also, the Purchasing Division offers many other services to state agencies, political subdivisions, and the vendor community, including, but not limited to: acquisition and contract administration; surplus property program; fleet management; travel management; Capitol parking; purchase order encumbrance; and, inventory management.

Senate Bill 417 continues the Commission for the Deaf and Hard-of Hearing until July 1, 2005. serves as a communication bridge between hearing persons and those who are deaf or hard of hearing. The Commission works toward an environment in which deaf or hard of hearing West Virginians of all ages have an equal opportunity to participate fully as active, responsible, productive and independent citizens of the state.

Senate Bill 471 continues the West Virginia Board of Pharmacy until July 1, 2008. The Board, regulates the employment of licensed interns, appoints inspectors and regulates the practice of pharmacy generally in the state.