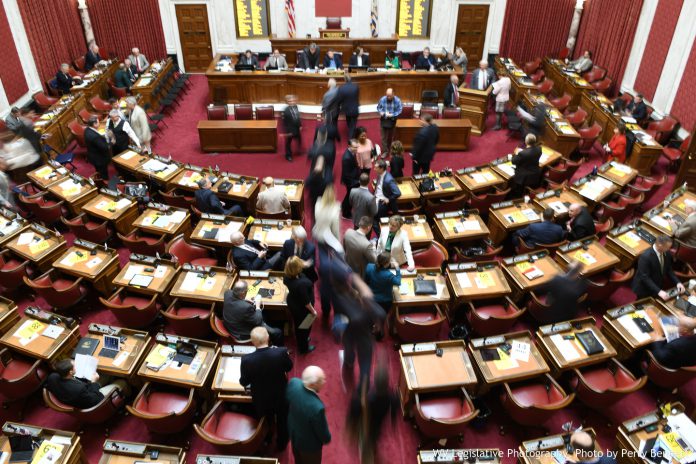 As of 4 p.m., Friday, January 26, 2018, the tenth day of the second regular session of the 83rd Legislature, 846 bills have been introduced in the West Virginia House of Delegates. Of those bills, 18 have passed and have been sent to the Senate for further consideration. All of these bills have passed this week:

House Bill 2822 (allowing honorably discharged veterans who possess certain military ratings to qualify to take an examination for licensing as a plumber, electrician, and sprinkler fitter) allows any person who has served honorably on active duty in any of the Armed Forces of the United States and who has successfully completed the course of instruction required to qualify as a plumber, electrician, and sprinkler fitter.

House Bill 2838 (allowing military veterans who meet certain qualifications to qualify for examination for license as an emergency medical technician) allows any person who has served honorably on active duty in any of the Armed Forces of the United States and who has successfully completed the course of instruction required to qualify as an emergency medical technician.

House Bill 2916 (authorizing certain first responders to carry firearms) authorizes supervising entities to authorize reserve deputies, ambulance crew members, firefighters, rescue squad members and emergency service personnel to carry firearms. It specifies the training required for them to be eligible to carry a firearm and allows them to be reimbursed for the cost of the training.

House Bill 3004 (relating to filling vacancies in offices of state officials, United States Senators, Justices, judges, and magistrates) requires vacancies in offices of state officials to be filled with an individual of the same political party with which the individual vacating the office was affiliated at the time of his or her election to the vacated office. The bill additionally provides similar language relating to legislators and county commissioners and revamps the procedure for selecting persons to fill vacancies on a county commission.

House Bill 3089 relates to the adoption of instructional resources for use in the public schools.

House Bill 4002 (providing that all delegates shall be elected from one hundred single districts following the United States Census in 2020) provides that in the reapportionment and redistricting following the 2020 US census that the House of Delegates shall comprise one hundred single member districts. West Virginia is currently one of only 10 states that still employ multi-member districts.

House Bill 4035 creates a legislative coalition to study and report to the Legislature on palliative care.

House Bill 4150 (prohibiting telecommunications and IP-enabled voice services from displaying the name or telephone number of the recipient) prohibits spoofing caller ID information that is fraudulent or misleading.

House Bill 4169 (requiring certain establishments and facilities to post human trafficking assistance notices) requires posting of a notice in designated locations of a hotline available for people to call to report human trafficking to be posted in areas where persons are subject to human trafficking; authorizing state representatives to give notices; and establishing penalties for failure to post.

House Bill 2546 would allow replacement costs of employer provided property to be deducted from an employee’s final paycheck if the property is not returned. This bill will be on third reading Monday.

House Bill 4183 relates generally to standardized testing requirements for nonpublic schools. This bill will be on third reading Monday.

House Bill 2799 would prohibit the superintendent of schools from requiring a physical examination to be included to the application for a minor’s work permit. This bill will be on second reading Monday.

House Bill 4010 would provide no requirement to perform or host a marriage ceremony that does not conform to sincerely held religious beliefs. This bill will be on second reading Monday.

House Bill 2831 relates to the reconstitution of the Driver’s Licensing Advisory Board. This bill will be on first reading Monday.

House Bill 4006 would revise the processes through which professional development is delivered for those who provide public education. This bill will be on first reading Monday.

House Bill 2026 would provide a maximum repair cost for insured owners of motor vehicles if a collision with a deer caused the damage.

House Bill 2039 would establish a tax credit for new businesses that locate in the state.

House Bill 2055 would include volunteer firefighters within the Public Employees Insurance Act.

House Bill 4032 would withhold pay of a legislator who misses an entire floor session.

House Bill 4148 would allow medical marijuana to be grown outdoors by licensed growers.

House Bill 4177 would prohibit smoking of tobacco products in a motor vehicle while an individual sixteen years of age or less is present.

House Bill 4191 would prohibit employees of the state who have convictions for driving under the influence from driving or operating state owned vehicle.