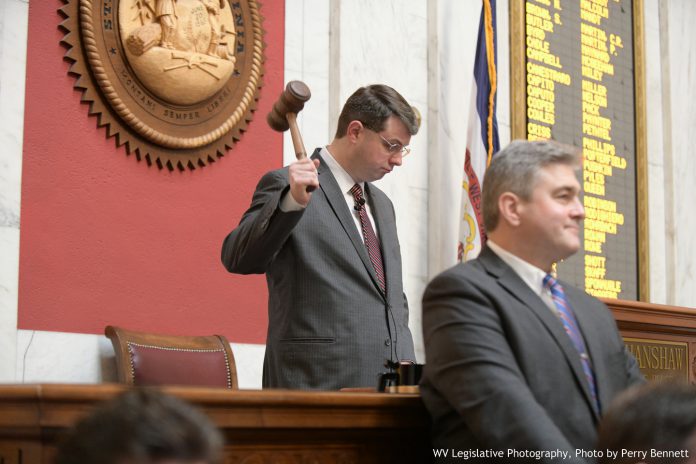 As of 4 p.m. on Friday, February 1, 2019, there have been 820 bills introduced in the House of Delegates. Of those bills, fifty-one have been passed by the House and have been advanced to the Senate for further consideration. Noteworthy Bills that passed the House This Week:

House Bill 2005 relates to the Broadband Expansion Act of 2019. The purpose of this bill is to provide a special method for valuation of certain wireless technology property for property taxes; establish Public Service Commission jurisdiction over make-ready pole access within the state; provide for the undertaking of a feasibility study involving broadband, and establish the West Virginia Small Wireless Facilities Deployment Act.

House Bill 2209 allows military veterans who meet certain qualifications to qualify for examination for license as an emergency medical technician.

House Bill 2547 relates to the election prohibition zone. This bill adds language to correct an oversight wherein the 300-foot distance was not reduced to the 100-foot boundary in this particular section.

House Bill 2600 relates to publication of sample ballots. The bill seeks to clarify the publication requirements and to provide a more cost effective system of publication.

Senate Bill 17 would allow for the option of psychological examinations to be available to certain criminals seeking parole in West Virginia. Currently, according to statute, those seeking probation must go through a series of treatments and studies. This bill would add the option of a psychological exam with the proper documentation to that list.

Senate Bill 119 would specify that documents prepared by a licensed health care provider for the purpose of improving the quality, delivery, or efficiency of health care is confidential, and is not subject to discovery in a civil action or administrative proceeding. Assessments, tests, procedures, and quality controlled documents would also be privileged information.

Senate Bill 272 is a bill that would update the code for the Committee on Special Investigations. This bill was passed unanimously by both the House and the Senate last year, but was ultimately vetoed by the Governor because of a defective title. This bill would clarify the procedures of interviews, presentation of evidence, and executive session for the Committee on Special Investigations. It also clarifies that the Senate President and Speaker of the House must be the chairs of these committees, and it establishes criminal offenses for obstructing the work of the commission.

House Bill 2191 would allow licensed West Virginia Lottery operators to be also be licensed as lottery retailers in ten state locations. The bill would also remove restrictions on bill denominations accepted by limited video lottery terminals, and also fix the video lottery revenues at 50%. This bill also passed, and was voted to be effective from passage if it do pass.

House Bill 2514 would permit pawn brokers to voluntarily disclose if an item has been sold or pledged, as long as the pawn broker does not break confidentiality or give identifying information.

House Bill 2602 was additionally passed, a bill that would clarify that possession of stolen items is larceny under state law. According to statute currently, larceny is only applicable in instances where stolen items are transferred

House Bill 2492 relates to mandatory reporting procedures of abuse and neglect of adults and children.

House Bill 2510 relates to special funds of boards of examination or registration.

Senate Bill 28 is a bill that would remove the $200,000 limitation on the amount of a portion of hotel occupancy tax proceeds that a county commission or municipality may spend annually on emergency services.

Senate Bill 177 is a bill that would add a sunset provision and improve energy efficiency standards for commercial buildings.

House Bill 2324, a bill to allow licensing for auricular acupuncture in the state. This is a method of acupuncture used to draw out toxins from the ear. It is argued that this therapeutic model can be used by those working in substance abuse prevention fields to help relieve the side effects of drug withdrawal.

House Bill 2503 would amend a current statute that requires the state to pay for counsel for parents involved in abuse and neglect parents, even parents who aren’t at risk for losing parental rights. House Bill 2503 would require the DHHR to identify parents in state abuse and neglect cases as being “offending” and “non-offending”, and would therefore not require the state to pay for counsel to represent the non-offending parents in court.

House Bill 2521, a bill permitting the sale of fur-bearer parts, was also passed. This bill would allow for the legal purchasing, trading, and selling of animal male penis bones.

Bills Being Considered in the House:

House Bill 2679 is a bill that would allow West Virginia citizens to receive valid state identification cards with the option to opt out of a photo ID if it violates an individual’s religious beliefs.

House Bill 2070 is a bill that would make it legal for motorcyclists in the state of West Virginia over the age of 21 to ride or be a passenger on motorcycles without a helmet without repercussions.

House Bill 2452 would establish a cyber security framework within certain state agencies. This bill would allow the West Virginia Office of Technology to establish a Cybersecurity Office within their department to facilitate a software program to strengthen the cyber security checks within state agency devices. This bill would be applied to all state agencies except for institutions of higher education, the county board of education, the WV Legislature, and the WV Judiciary. Agencies would be subject to cyber security risk assessment, adherence to enterprise standards, and plans of action in the event of a cyber-attack

House Bill 2612 would authorize the Secretary of the West Virginia Department of Health and Human Resources to update rules regarding the source water protection plans throughout the state. Currently, each public water utility is mandated to report the status of their water and a water protection plan to the state commission every three years. This bill would allow the timeframe of this reportage to be more flexible in order to give these water utilities more time to review the status of their water protection.

House Bill 2674 would create a loan repayment program for mental health professionals who have worked in the state of West Virginia within an underserved area for at least five years.

House Bill 2728 would establish West Virginia’s Municipal Home Rule Program as a permanent program, as well as make the program available to several other Class IV cities within the state. The Municipal Home Rule Pilot Program is currently in place within four cities in the state: Huntington, Charleston, Wheeling, and Bridgeport. The Pilot Program was developed by the West Virginia Legislature in 2007, but due to a sunset provision, the program has to be regularly renewed. House Bill 2728 would establish the program’s permanency, allowing the four cities already established and four new cities every year to utilize municipal home rule without the need for renewal. This program extends the legislative power of individual localities, allowing them to issue taxes and levies and pursue large scale municipal projects without going through state or federal government. Cities are able to issue new taxes, new projects, and even issue referendum votes as long as the laws passed do not violate any state or federal statute.

House Bill 2420 would establish a Mountaineer Trail Network Recreational Authority for the purpose of oversight. The bill would also limit the liability of landowners, set forth purchasing and bidding procedures, and provide for conflicts of interest.

House Bill 2363 is a bill to revise the reportage requirements of the Upper Kanawha Valley Resiliency and Revitalization Program. The bill would extend the length of the program by ending it on June 30, 2024 rather than 2021. The bill would also require the program to report to the Joint Committee on Government and Finance every October.

House Bill 2004 would encourage communication between those in public West Virginia high schools preparing to go into a technical field, and the community and technical colleges that offer those corresponding programs. The bill would facilitate the ability for students to earn credit toward licensure while they’re still in high school, making it a seamless transition into their technical programs.

House Bill 2515 is a bill that would exempt the sale and installation of mobility enhancing equipment for West Virginia citizens. Currently, healthcare providers are exempt from sales tax when it comes to the purchase and modification of medical equipment for the purpose of increasing a patient’s mobility. This bill would extend that tax exemption to West Virginia citizens who are subject to paying for the mobility enhancing equipment themselves.

House Bill 2490 would prohibit the Secretary of the Department of Health and Human Resources from proposing or enforcing any rules which prevent recreational water facilities from making necessary upgrades, renovations, or repairs.