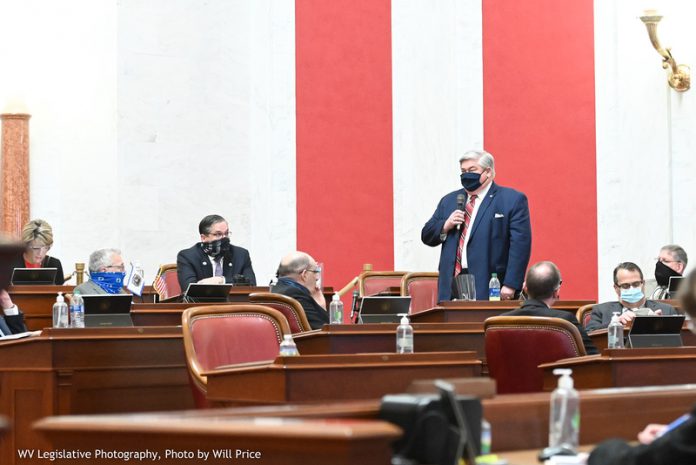 Senate Bill 673 relates to the venue for bringing civil action or arbitration proceedings under construction contracts.

Senate Bill 587 makes contract consummation with the State of West Virginia more efficient, by clarifying that government officials are not permitted to enter certain contract terms.

Senate Bill 585 requires the board of education to create and provide a course in family and consumer sciences in secondary schools.

Senate Bill 458 limits the power of government entities to prohibit firearms during a declared state of emergency.

Senate Bill 634 requires that law enforcement and correction officers be trained in appropriate interactions with individuals with autism spectrum disorders. The bill would also require the Law Enforcement Professional Standards subcommittee to develop guidelines for law enforcement and correction officer response to individuals on the autism spectrum who are victims or witnesses to a crime or suspected or convicted of a crime.

Senate Bill 588 expands circumstances under which the State Board of School Finance can withhold payment of state aid from a county board.

Senate Bill 488 provides that a convention and visitor’s bureau shall satisfy certain requirements to receive funding from hotel occupancy taxes.

Senate Bill 401 relates to the Consumer Credit and Protection Act.

Senate Bill 684 adds the Curator of the West Virginia Division of Arts, Culture, and History as an ex officio voting member of the State Library Commission.

Senate Bill 674 clarifies that unpaid restitution need not preclude a person from obtaining a valid driver’s license. The bill establishes procedures to obtain a lien against a person who owes restitution.

Senate Bill 671 requiring that the Office of Emergency Medical Services director be appointed by the Secretary of the Department of Health and Human Resources.

Senate Bill 655 reschedules the review of Public Service Commission rules regarding recovering, hauling, and storing wrecked or disabled vehicles and changes a sunset requirement on those rules.

Senate Bill 641 provides for the use of severance funds for litter programs.

Senate Bill 543 establishes the Chuck Yeager Mountain State Medal of Excellence and provides an annual process for a West Virginia who demonstrates exceptional leadership or innovation to be awarded.

Senate Bill 508 increases the funds in the Public Records and Preservation Revenue Account for grants to counties for records management, access, and preservation purposes by increasing the fees for copies of public records.

Senate Bill 486 renames the Chief Technology Officer to the Chief Information Officer and updates definitions relating to the Office of Technology.

Senate Bill 470 creates Daniel’s Law, which works to increase safety and security of certain public officials in the justice system, including judicial officers, prosecutors, and law enforcement, as well as jurors, and any family members of these individuals.

Senate Bill 360 authorizes poll clerks to work and be compensated for both full and half days of work during an election.

Senate Bill 718 provides a rebate of severance tax when capital investment made in new machinery and equipment directly used in severance of coal, or in co preparation and processing plants.

Senate Bill 711 changes the minimum enrollment to 1,200 in each county.

Senate Bill 663 provides for a fee for the processing of criminal bonds and the bail piece and requires all collected fees to be deposited in the Courthouse Facilities Improvement Fund.

Senate Bill 661 permits retailers to assume or absorb any sales or use tax assessed on tangible personal property.

Senate Bill 550 provides counties with authority to impose a county sale and use tax of one percent under certain circumstances and clarifies that a county sales and use tax does not apply to incorporated areas of the county.

Senate Bill 485 creates the offense of possessing a firearm on one’s person during the commission of certain qualifying felony offenses.

Senate Bill 335 modifies the eligibility cost for which grants from the West Virginia Invests Grant Program may be used.

Senate Bill 231 authorizes the Commissioner of the Bureau for Public Health to approve additions to the forms of lawful medical cannabis which may be used and the conditions for which medical cannabis use is authorized pursuant to recommendations of the Medical Cannabis Advisory Board.